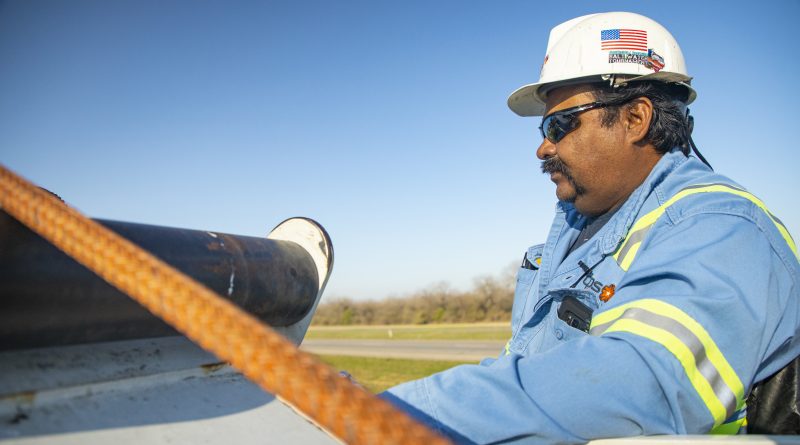 A pinprick sized hole in a lineman’s protective gloves can be a life-threatening safety hazard for CPS Energy workers.

“If the pole touches the (high-voltage) wire, they are protected as long as their body doesn’t touch the pole. The gloves protect them from getting electrocuted,” said Santiago “Jimmy” Barrientes, who has been with CPS Energy for 30 years. Barrientes is a pole boom operator – which is a person on a crew responsible for setting utility poles.

CPS Energy crew members who work closely with powerlines – such as a lineman or a pole handler – are required to wear rubber, insulated electrical gloves as part of their personal protective equipment, or PPE.

If damaged with even the slightest vulnerability, the electrical current can penetrate through the gloves and cause severe injuries.

For pole handlers who conduct their work at the ground level, the gloves serve as an essential piece of equipment.

On Jan. 22 at CPS Energy’s Safety Reset, Barrientes was selected as this year’s CEO Courage Award recipient for his bravery in the field to “Stop the Job” and catching a potentially severe incident involving a pole crew member.

In early 2019, Barrientes was part of a pole crew that was installing a new utility pole over a barbed wire fence along Interstate 35 South in San Antonio.

As he prepared to maneuver the utility pole over the fence, Barrientes observed one of his fellow crew members, a pole handler, slip and fall forward grabbing onto the barbed wire with his rubber gloves.

“He tried to get up and slipped and grabbed that same barbed wire. At that time, I said, ‘No, something is wrong,'” Barrientes said.

After stopping the job and advising his crew member to switch to his spare gloves, Barrientes said they were able to finish their work.

Fearing the pole handler may overlook his damaged gloves, Barrientes urged they test the gloves for any puncture holes that may have been caused by the barbed wire.

“To check them, we put water in the glove and then squeeze it to see if any water comes out. We saw a trickle of water coming out which I knew it was a puncture hole,” Barrientes said.

Barrientes said if he and the crew “would have went to the next job and (the pole) would have touched the primary (electrical wire), something bad would have happened to him. I’m glad I caught it.”

His ability to be aware and a leader in keeping his crew safe on the job inspired President & CEO Paula Gold-Williams, who emphasizes “Safety First” daily.

“Jimmy made sure that after the job was completed, there was a thorough review of those gloves and what was found? A pinhole that could have been catastrophic,” she said.

Gold-Williams said a pinhole is all it takes to hurt a crew member and she commends Barrientes for his courageous act.

“If you start cutting corners, something bad is going to happen. Safety is important,” Barrientes said.