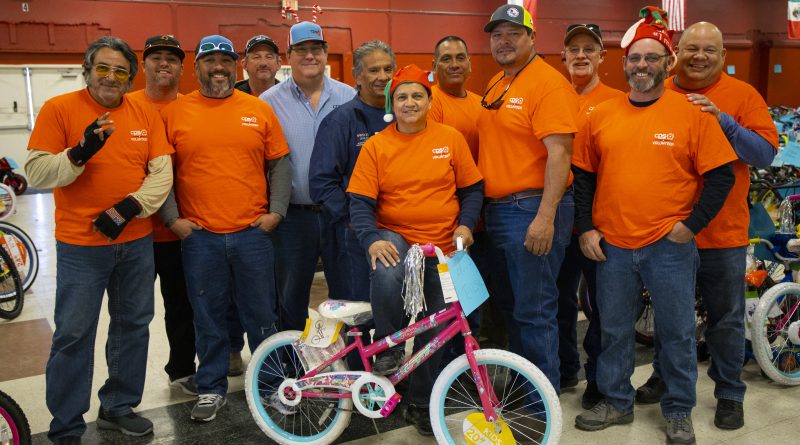 An oversized barbie dollhouse will surely warm the heart of a 7-year-old girl on Christmas Day.

“We gave [Angel Tree] a try, and I actually like it because my daughter got what she wanted. It is pretty nice of [Salvation Army] to do that,” said Nidia Tavares, the girl’s mother.

For the sixth year, CPS Energy teamed up with Salvation Army for its Angel Tree program that helps families in need with toy and clothing donations during the holiday season.

“CPS Energy employees have big hearts,” said Rudy Guerrero, volunteer program lead at CPS Energy. “From giving the toys, donating them to the families, and volunteering throughout the weeks to get the toy workshop ready for distribution days. We are involved in every step of the way in this project with Angel Tree.”

Beyond the Christmas presents, Guerrero said more than 170 CPS Energy employees and their families help out as an Angel Tree volunteer.

For King Davidson, his motivation for signing up every year goes beyond helping the families in need. He has volunteered three years in a row for an unpopular position: Breaking down more than 1,000 extra-large boxes a day.

“Second day, I am coming in a little rough,” said Davidson, who works at CPS Energy as a journeyman lineman.

“My first year [volunteering at the Angel Tree distribution warehouse], I saw no one wanted to do the boxes. I took over doing the boxes and stacking them…that’s what brings me back every year because I know nobody wants to do this job.”

This year, Salvation Army estimates the Angel Tree program will help about 7,500 children and 500 senior citizens in the San Antonio area, with CPS Energy adopting 622 children and 129 seniors.

CPS Energy also contributed to donating $400 to the Salvation Army’s total raised of about $8,000.

Tavares said she is thankful for the Angel Tree program and its partners that made this year’s Christmas extra special for her family.