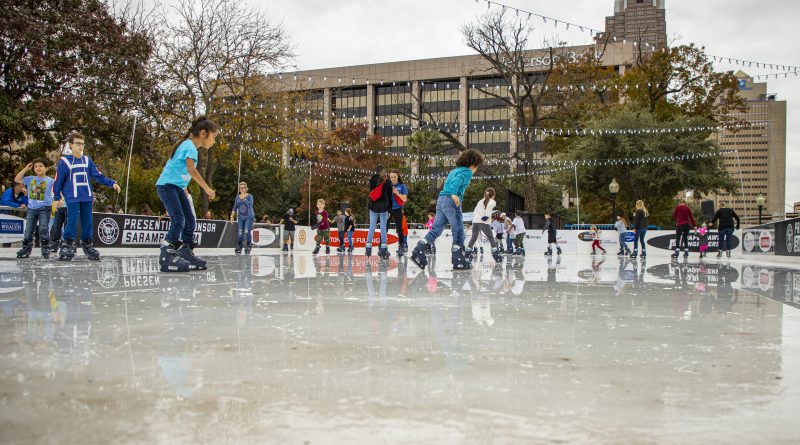 When San Antonians think of the holidays, they may picture the annual tree-lighting ceremony, tamale season, or epic festivities across town.

But for the first time in the city’s history, families will now be able to create new, lasting memories at the “Coolest Place in Town” made possible in part by hardworking CPS Energy crews.

“When we started planning, we knew we were faced with not a big-time period (and) we had two other jobs going at the same time,” Samuel Perez, a heavy crew foreman with CPS Energy, said.

Perez said he and his fellow crew members began to discuss “how many transformers we were going to have to add, secondary grid, and to bring in circuits in order to give them the 900 amps they needed to freeze the ice in this 90-degree weather.”

Perez said when they first they learned there was going to be an 82 by 52-foot ice skating rink set to be staged outdoors in Travis Park, they thought, “How?”

“This one was unique. When we got the word that there was going to be an ice skating downtown, we chuckled a bit,” Perez said.

“But we put our nose to the ground and our guys, our cable splicers, made it happen. They were down here working long hours, and the result is what’s going on right now,” he said.

To maintain energy and keep the 6-inch layer of ice frozen, Perez said CPS Energy crewmembers had to add a “submergible transformer, a network protector and a secondary grid” in the area.

A transformer increases or decreases electric voltage. In areas where electric infrastructure is underground, a submergible transformer can be used. It is designed to resist corrosion and continue working during flooding. The network protector and secondary grid supports the equipment by serving as a surge protector and backup power feed.

“Once we were out here doing our work, we saw the foundation being laid (at Travis Park) and that gave us a little motivation to get it done by the required deadline so that way everyone could do their part to make the (outdoor rink) happen,” Perez said.

The Rotary Club of San Antonio’s “Coolest Place in Town” will be open through the end of January and you still have time to enjoy some fun on the ice.