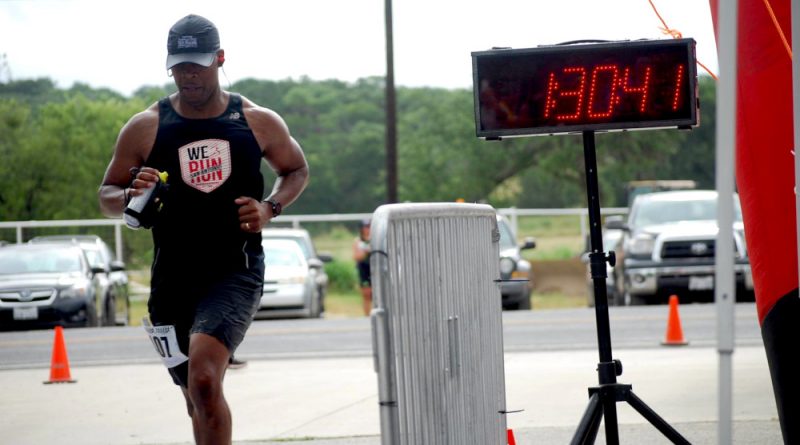 Running marathons are tough enough, but imagine taking on multiple marathons after major surgery. It’s not as if Demetrius Payton leapt from the operation table and ran a 5K, but when you learn what it takes to recover from robotic prostatectomy, it’s amazing what he’s accomplished athletically in the last 10 years.

Payton, who serves as the Interim Director of Infrastructure & Operations at CPS Energy, was diagnosed with prostate cancer at 39 years of age. Luckily, he caught it early, which gave him an opportunity to look at different options. He and urologist Dr. Naveen Kalla, decided on Robotic Prostatectomy surgery, which consists of five holes made in the stomach. The recovery wasn’t easy and the challenges of not having a prostate are ever present, but Payton has found motivation to keep trucking thanks to the love and support around him.

Payton is no stranger to sacrifice, spending 15 years in the Air Force, later Commissioning in the Army for an additional 10 years, he was picked up in the medical service corps in the medical brigade. It was while being in the Army that Payton received the news. The longtime military veteran was 40 when he made the decision to go with the procedure. Once the organ was removed, it was analyzed and it turned out the cancer was aggressive. It’s the best decision Payton could have made.

The initial running relationship with the American Cancer Society (ACS) occurred after Payton’s retirement from the Army. While working at Tesoro at the time, he was approached by a friend at work about a running group that raises money for the ACS. Since then, Payton has ran 14 full marathons and 13 half marathons, raising more than $10,000 toward cancer research.

“If you are going to run a marathon, all the enthusiasm of running a marathon dies at about mile-20. No matter how hard you train, between mile-16 and mile-20, it depends on where you are in your maturity as a runner,” said Payton, even though most normal people would lose enthusiasm at mile two. “It hits you because your body can only take so much. The problem then becomes at that point, you got to have a purpose to finish.”

For Payton, that motivation came from his mother who passed away from breast cancer in 2016. Before her passing and to this very day, she is one of the people that helps motivate him through it all.

For a guy who wasn’t the biggest fan of running in his younger days, Payton has become a remarkable runner well into his 40s. In fact, he ran with the pace sign at the 2018 Rock ‘N’ Roll Marathon on Sunday, Dec. 3. The four-hour marathon requires an average pace of 9 minutes, 9 seconds per mile, which is a moderately fast pace for most runners.

Who knows how many more marathons Payton will run, but one thing that’s for sure is he will continue to promote cancer prevention and control awareness wherever he goes. The Centers for Disease Control and Prevention have several screening test resources, click here to learn more.

A big congratulations goes out to CPS Energy employees who took part at this year’s Rock ‘N’ Roll Marathon. Check out some photos from the marathon here.