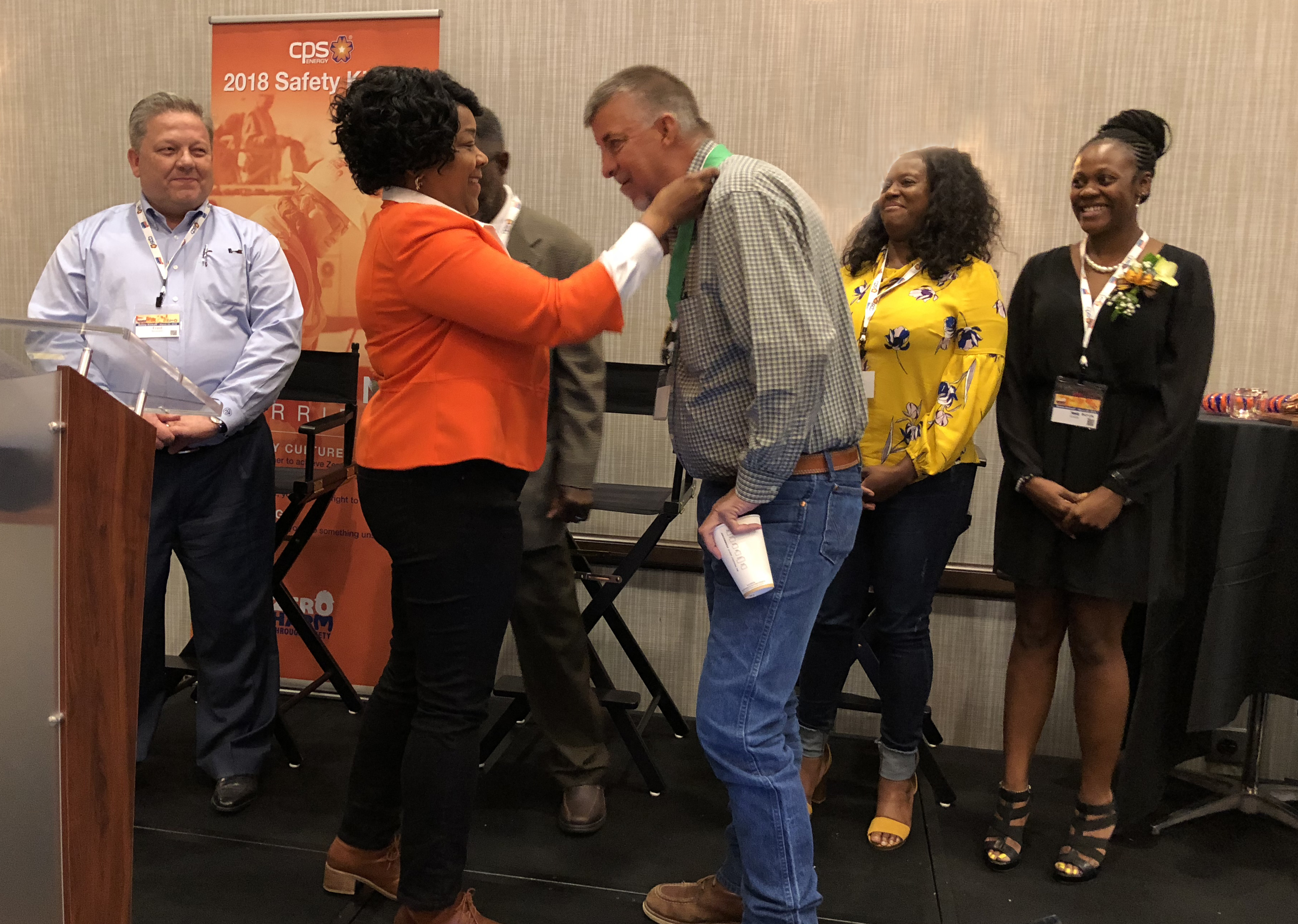 When you hear the word “courage,” you may think of the Cowardly Lion that wished for this trait in the movie The Wizard of Oz. At yesterday’s CPS Energy Safety Kickoff, courage was one of the key points that resonated throughout the program as speakers shared real-life stories that showed how courage can drive safety. The annual event serves as a refresher in employee and customer safety, our Company’s number one priority.

Former Flight Attendant Doreen Welsh spoke to a group of around 300 employees who represented all areas of CPS Energy – gas, electric, power generation and others – to tell her harrowing experience on what would become her last plane ride as an attendant.

“The impact was violent, horrible,” Doreen told the crowd, as she spoke about her life and about how it nearly ended when US Airways Flight 1549 crash-landed on the Hudson River in January 2009.

Now a public speaker, Doreen was just 19 when she became a flight attendant. A little leery at first about being an attendant, Doreen quickly adjusted and spread her wings. She served over a million customers in her 38-year career aboard thousands of flights. Interjecting a bit of humor into her personal account, she spoke of dealing with passengers who complained about not having enough ice in their drinks or those who were physically larger than her asking for her help to get their baggage in overhead compartments.

Along with those quirky passengers, Doreen was also used to dealing with the occasional turbulence during flights and being on planes that sometimes returned back to where they had just taken off because of mechanical issues. She wasn’t overly concerned when these things happened – her annual training and experience had prepared her to handle emergency situations.

The day she boarded Flight 1549 at New York City’s LaGuardia Airport was pretty ordinary. She was looking forward to having supper with her son when she returned home to Pittsburg. Before the flight took off, Doreen received an unexpected call from him. Her son had received tickets to the AFC championship game and invited her to go. She was on cloud nine – she was going to see her favorite football team, the Pittsburg Steelers! She told him, “I love you,” before hanging up and then proceeded with boarding passengers. She went through the usual flight protocols, while thoughts of going to that game were top of mind.

The plane was cleared for takeoff and soon was airborne. About 1 ½ minutes later, Doreen felt the heavy jolt and then smelled a burning odor. Her training kicked in and she began checking to see if there was a fire. When she reached row 10, where she would normally hear the engines, there was silence. And there was silence from the cockpit. Doreen waited for the pilot to come on the intercom and say they were having mechanical issues and would be heading back to the airport to fix the problem. Not knowing what was happening, she instructed passengers to stay buckled. She sat back down and buckled herself in.

Then came the three gut-wrenching words from the cockpit, “Brace for impact.”

“There was pure terror running through my body. This is it,” said Doreen, remembering that moment. As people reached for their phones, she thought about that earlier conversation with her son and telling him “I love you.” She chose not to call him but rather to be left alone with her thoughts. She saw flashes and flashes of pictures of her life that she described as “wonderful, wonderful memories.” Even with that going on, she was telling passengers to brace themselves.

Then came the crash-landing. The back end of the plane where Doreen sat suffered the greatest impact, and a large piece of steel came up through the floor and severely gashed her leg. She also had blood running down her jaw, caused when she unknowingly bit her tongue during impact. Because of an adrenaline rush, Doreen didn’t realize she had been injured. Her only memory immediately after impact is of the overhead compartments that fell and oxygen masks that released and were swinging back and forth over seats. “When I thought we might be dead, I heard the captain yell out, ‘Evacuate, evacuate!’”

Doreen thought the plane had turned back and crash-landed at La Guardia. She worked her way through the rows of passengers to a porthole and saw only water. The frigid water began filling the back end of the plane. Doreen directed those on board to go forward to the wing exits, and even directed them to climb over seats if they could.  “People just weren’t moving,” she said. Doreen was soon chin-deep in the icy waters, the adrenaline drained from her and a sadness overcame her. She then describes a burst of energy that came to her. She again took control of the situation – as she had learned in training – and got the remaining passengers and herself to the emergency exit.

All 155 passengers and crewmembers were rescued by ferries and boats and survived.

“There were five crewmembers on board. We had years and years of experience. Because all five of us did what we had to do, it was a ‘Miracle on the Hudson,’” she said. You may have seen the movie about that fateful day. Asked how much of it was accurate, Doreen responded that most of the movie was “just Hollywood.”

Doreen was in the hospital for a few days after the crash, and acknowledged that she still suffers from post-traumatic stress disorder (PTSD). It was later discovered that Canada geese that flew into the engine were responsible for the plane’s engine failure.

While Doreen emphasized the importance of continued training and refresher programs, she also told those at the Safety Kickoff that you have to use common sense – use your training first but be prepared to do other things that could save your life.

Doreen’s heroic actions and those of her fellow crewmembers helped save the lives of those passengers aboard Flight 1549, and their own lives.

Along with the former flight attendant, there were other heroes at the Safety Kickoff that stood out and were recognized.

Following Doreen’s presentation, a Courage Award was presented to honor a CPS Energy employee who exhibits character, bravery and perseverance and has a strong commitment to achieving a ZERO Harm culture. This award was the first ever to be presented and honored the spirit of Dr. Virginia Moody.

Virginia served as a coach, mentor and friend to so many at CPS Energy. She even helped coordinate and secured the keynote speaker for last year’s Safety Kickoff. Virginia passed away in November 2017. “She was the first person I saw when I returned to work after losing my daughter in 2015,” recalled Fred Bonewell, CPS Energy’s Chief Security & Safety Officer. “She told me, ‘God needed your daughter more than you.’ She enabled me to get through that difficult experience.”

The award was presented to Lyndon Hoch, who Fred said, “Lives and breathes safety.”  Lyndon, a Safety & Health Program Manager for Substation & Transmission, was recognized for his willingness to always lend a helping hand and for his commitment to embracing and instilling a ZERO Harm culture at our Company. Lyndon, shown in the top photo, received the award from President & CEO Paula Gold-Williams, who was joined onstage by Virginia’s daughters and husband.

In addition to the Courage Award, other areas and team members were recognized with a Chief Safety Award for practicing safety or observing and reporting something unsafe to keep themselves and their coworkers safe.

Because of the commitment of each of our 3,100-plus employees, our Company hit historic lows last year in regard to safety incidents.

“That wasn’t by luck,” said Fred. “But we can’t get complacent. Safety is a journey. It’s forever. Keep it top of mind, top of heart. Be in the moment and have the courage to break barriers – speak up and take action when you see anything unsafe. Our families expect us to come home every day.”