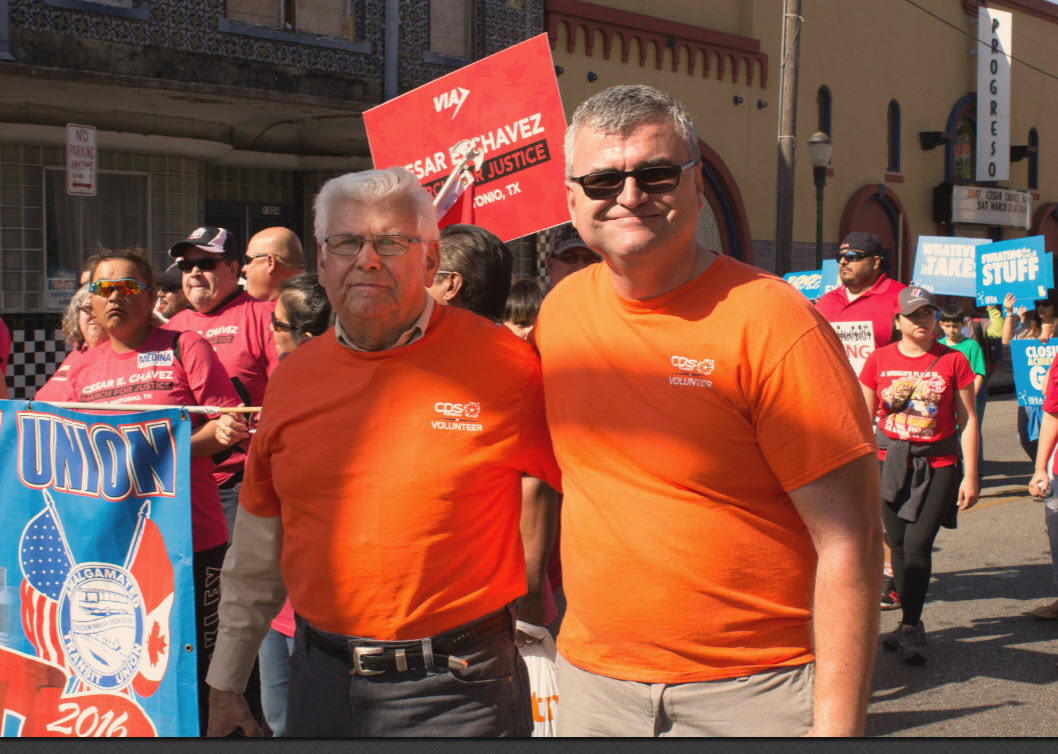 On Saturday, CPS Energy employees gathered with hundreds of people in our community to celebrate the life and legacy of Cesar Chavez. For the past decade, CPS Energy employee, Gerardo Escamilla Jr., has walked side by side with his father in the annual march. Along with remembering the historic leader, the tradition has afforded him the opportunity to celebrate his father’s legacy.

“Every time we march, I think about how different it was for my dad being a laborer from Mexico working in California in the 60s,” said Gerardo Jr., an engineering associate at our Energy Management Center. “He was very much a part of that era and frequently joined union workers on the picket lines to protest the mistreatment of farm workers and low wages.”

As a member of the Centro Social Obrero and La Causa, Gerardo Escamilla Sr. was an active participant in Cesar Chavez’s movement. He joined thousands of union workers to protest the suffering of farm workers and their families, suppression of their rights, the use of dangerous pesticides, and the denial of fair and free elections. While in MacFarlane, California, he and other laborers struggled to live on $1.25 an hour.

“It was very difficult for the Latino families to live on that kind of wage,” the elder Escamilla said. “There was a lot of discrimination. When I look back on that time, it gives me a deep satisfaction to know that I did my part to help improve living conditions for these families.”

Cesar Chavez’s boycott in 1968 resulted in a collective bargaining agreement guaranteeing workers the right to unionize. By 1972, Gerardo Sr. and his coworkers’ wages had increased to $8 an hour. The increased wages helped him support his growing family who lived in Nuevo Leon, Mexico. However, the strain of living so far away from each other prompted the Escamillas to move under one roof in San Antonio.

The move didn’t come without challenges. Gerardo Jr., age 10 at the time, remembers the difficulties of adjusting to a new culture and learning English. It was his father’s steadfast example and determination that inspired him and his four brothers to succeed. Gerardo Sr. attended night classes to learn English and earned an associate’s degree in AC, Refrigeration and Heating from St. Philip’s College.

“My dad was always encouraging us to study hard,” said Gerardo Jr. “He wanted us to get opportunities that he never had. Eventually, we all developed a keen interest in math and saw our own potential to enter engineering fields.”

At the age of 74, Gerardo Sr. is now enjoying the fruits of his labor as he watches his five sons continue his legacy with rewarding careers in engineering and information technology.

“I am very proud of my sons and what they have accomplished,” he said with a smile. “They’re hard workers. Seeing how much they’ve succeeded makes me very content. It reminds me that it was all well-worth my efforts and sacrifice.”

Gerardo Jr., who has enjoyed a 19-year career at CPS Energy, is proud to walk alongside his coworkers and dad at the annual march to celebrate the freedoms and opportunities they enjoy because of people like his father and Cesar Chavez.

“Growing up, my father always taught us to never forget where we came from and to be humble,” he said. “Marching with my dad gives me a chance to remember and celebrate his journey.”

Courage: not just for the lionhearted

Employee tradition reels in a lifetime of memories for kids