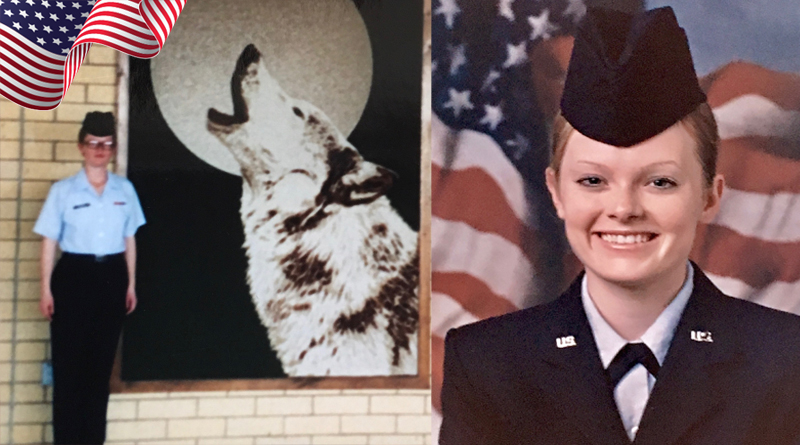 CPS Energy has a diverse workforce and culture that makes it much like a “melting pot” of talent. Our highly skilled employees come from varied backgrounds, and each has a story to tell. Today as we continue our blog series honoring several of our company’s military veterans, we’re featuring an Air Force veteran with roots in Hoopeston, Illinois.

While most of her high school senior classmates were making college and career plans, Sylvia Zamarripa wrestled with one of the most important decisions of her life: whether to enlist in the military.

She was a native of the small farming community of Hoopeston, which only offered a narrow field of career opportunities. Most people, she said, worked on large family farms or within the agricultural industry.

She was familiar with the commitment and opportunities that came with enlisting: her brother was an Air Force medic who had deployed to Iraq and her uncle was an Army medic.

So at age 18, Sylvia drove to the nearest large town to meet with the Air Force recruiter and sign the paperwork. Not long after the ink dried, she arrived at Lackland Air Force Base in San Antonio for basic training, which was intense both physically and mentally.

As part of Wolfpack 331, an all-female flight, Sylvia set the bar high for herself. She was determined to perform at the highest level and excel. She proved to be well-suited for the Air Force’s rigorous, structured environment and found grit and resilience helped her in the most difficult moments.

“I thought then about pursuing difficult things for a greater purpose and that has stuck with me all my life.”

After graduated from basic training, Sylvia received a coveted spot to attend field training as an intelligence analyst. In this role, she would brief service members and pilots before critical combat missions.

“I was excited. To go from the cornfields of Illinois to a potential battlefield was a big leap,” she said. Sylvia traveled to San Angelo in West Texas to attend tech school at Goodfellow Air Force Base. She recalls with a big smile how this was the first time she had ever seen tumbleweeds and jackrabbits.

As Sylvia was set to tackle tech school, she experienced a new life- and career-changing event. She found out that she and her husband Rafael were expecting a son, Brock, and she separated from the Air Force.

The couple returned to Illinois and despite the new challenges that came with motherhood, Sylvia enrolled at Danville Area Community College before transferring to Indiana State University, to complete her bachelor’s degree.

“The time management training and the discipline the Air Force instilled in me made me even more determined to become a strong leader, first for myself, my son, and everyone I encounter.”

The Air Force veteran takes pride in helping others succeed as well.

The leadership skills Sylvia gained at just 18 years old set the foundation for a fulfilling career. She returned to San Antonio in 2008, and today works in CPS Energy’s Supply Chain area as the manager for Business Management & Analytics. In this role, she leads a team responsible for reporting, metrics and analytics.

For the past six years, Sylvia has mentored high school students through the Inspire U program, a partnership between CPS Energy and Communities in Schools of San Antonio. She also serves as a Reading Buddy, helping young children foster a love of reading.

Additionally, Sylvia served as the vice president of NEXTGen, a leadership development and networking organization at CPS Energy. “I loved seeing people grow and develop and how the employee resource group has impacted the company and our members.”

Of her personal and career experiences, Sylvia says, “Life takes you to unexpected places, but I believe it takes you to where you should be. My path was not the easiest, but I learned about leadership at a young age and I’m grateful for that experience. That leadership training, and my son, helped me develop grit and perseverance to prevail.”

Thank you, Sylvia, for your service to you country, and to all of our nation’s military veterans.