On Nov. 11, our nation will commemorate Veterans Day, honoring all service members who bravely and unselfishly are serving or have served our country. CPS Energy is proud to have more than 300 veterans working for the utility. Over the past few weeks, we’ve spotlighted a few of these veterans who’ve transitioned from military service to serving our community and our customers. We wrap up our series by shining the light on a veteran of the U.S. Marine Corps and Reserves.

There are moments in history where time seems to stand still. Moments etched in our memories years and even decades later. Moments that define us, stir raw emotion and sometimes cause us to take a stand.

Sept. 11, 2001, is one of those unforgettable days as we witnessed terrorist attacks on our nation’s soil. Those attacks led to the World Trade Center’s 110-story twin towers crumbling to the ground, and hijacked planes crashing into the Pentagon and a Pennsylvania field, altogether resulting in nearly 3,000 Americans losing their lives. 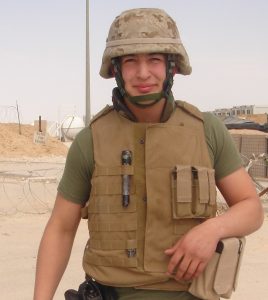 TeeJay Tejeda, a then Highlands High School senior, remembers exactly where he was when he first heard of the attacks. “I was headed to history class and remember seeing teachers in the hallway looking at each other in disbelief – like ‘Is this really happening?’ We had TVs in the classrooms tuned into the news and watched the horrific events unfolding in our country.”

When a military recruiter visited Highlands during the 2001-02 school year, TeeJay didn’t hesitate to take the Armed Forces qualification test. After graduating high school, he enlisted in the Marine Corps, becoming a third-generation service member.

When asked if his family had inspired him to join the military, TeeJay noted that the “true catalyst was seeing what happened on 9/11.”

The young recruit headed to San Diego, California, for basic training. For those in the Marine Corps, the final test of the 13-week training period is called ‘the crucible,’ a 54-hour field training exercise that includes a 48-mile march to the top of a mountain. Along the way, recruits are subjected to physical and mental challenges, arduous obstacle courses, sleep deprivation and food rations. They have to work together as a team and the entire platoon of about 50-60 recruits must successfully reach the top of the mountain. “When you get to the top, this is when you become a Marine – it’s the rite of passage,” said TeeJay. “It’s very emotional; a very proud moment.”

After completing basic training, the Marine was sent to Florida and North Carolina for Aviation Ordnance training. He took electrical classes and became well-versed in electronics and schematics. He worked on equipment such as bomb racks, weapons systems and anything that had to do with weapons systems on F/A-18 Hornets, a supersonic combat jet.

TeeJay became an Aviation Ordnanceman and was attached to the 3rd Marine Aircraft Wing, F-18 Squadron in Miramar, California. 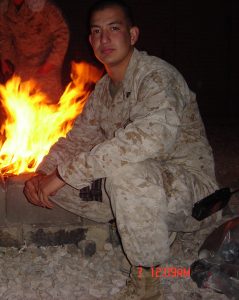 Along with serving stateside, he participated in the Universal Deployment Program (UDP), which allows service members to temporarily switch places with other service members at bases around the world. He spent about three months in Australia working alongside the Royal Australian Air Force, and six months in Japan, where he visited Hiroshima and witnessed the lingering effects of the atomic bomb dropped on that city some 70-plus years earlier. “It was so surreal,” he said as he spoke of the still-mangled buildings. “Eye-opening.”

Later, he became part of a security detachment and was deployed to Iraq for nearly seven months, providing base and area security, as well as security for high-ranking officials.

By the time he completed active duty in 2006, TeeJay had risen to the rank of Sergeant. He then served another year-and-a-half as a Marine Reservist.

The military veteran has been with CPS Energy for nearly 12 years, working today as Control Room Operator (CRO) for the Company’s Spruce 1 and 2 generating units. TeeJay and his colleagues help ensure a steady flow of power for our customers and community. The CRO credits his military experience with boosting his confidence, something he says helped him in interviews at CPS Energy and in rising to his current role.

We thank, TeeJay, for his commitment and valuable service to our Company and community, and we extend our heartfelt gratitude to all veterans for their dedicated and unwavering service to our nation.

Army veteran is a pillar of strength, resilience