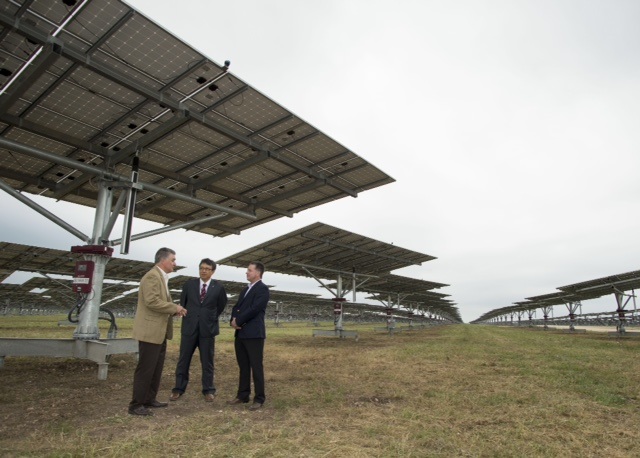 “CPS Energy has emerged as a national pacesetter in the world of renewable energy, and our company is proud to play a strategic role in helping them fulfill their vision to Greater San Antonio,” said Mark Noyes, president and CEO of ConEdison Development.  “CPS Energy also deserves praise for ensuring that their clean energy initiative yields major local and statewide economic development benefits for Texans.”

“We are the solar leader in Texas with 230 megawatts in the ground, and that will more than double to 500 megawatts by year’s end,” said Cris Eugster, CPS Energy’s executive vice president and chief generation and strategy officer.  “The dedication of Alamo 5 represents a significant milestone in our commitment to generate at least 65 percent of our energy from low- or no-carbon resources by 2020.”

Because of its dual-axis trackers, Alamo 5 generates power with high efficiency.  Such trackers allow for optimum solar energy output because of their ability to follow the sun both vertically and horizontally.  The dual-axis trackers, which utilize a patented “solar-sensing” technology to capture maximum solar resource, were produced by Sun Action Trackers, a San Antonio-based manufacturer of solar tracking and racking systems.

The Uvalde installation is one of a total of five Alamo solar facilities presently serving CPS Energy.  ConEdison Development – which now ranks as America’s sixth-largest owner of renewable power infrastructure assets – has played a development, ownership or operating role in three of the completed projects.  San Antonio-based OCI Solar Power is the contracted developer of a total of 10 projects, delivering 450 MW overall to CPS Energy.  All of the installations will be complete by the end of 2016.

Alamo 5 helps fulfill the commitments of CPS Energy’s ambitious New Energy Economy initiative.  As of the start of this year, the initiative’s impact includes: the creation of more than 950 jobs, $57 million in payroll, and an annual economic benefit of $1.6 billion.  The New Energy Economy maximizes the local economic development benefits generated by strategic investments in clean energy and innovative technologies like solar power, LED lighting, and smart grid infrastructure.

As an example of progress made under the initiative, the following San Antonio-based New Energy Economy partners manufactured some of the major components for Alamo 5:

ConEdison Development (CED) develops, owns and operates renewable and energy infrastructure projects.  The company is one of the largest owners and operators of solar projects in North America.

ConEdison Development is one of the competitive energy businesses of Consolidated Edison, Inc. [NYSE: ED], the nation’s oldest and one of the largest investor-owned energy companies, with approximately $13 billion in annual revenues and $45 billion in assets.  More information can be obtained by calling 914- 993-2185.  You can also visit the Consolidated Edison, Inc. website at www.conedison.com.

CPS Energy is the nation’s largest municipally owned natural gas and electric company, providing safe and affordable service to 786,000 electric and 339,000 natural gas customers in the Greater San Antonio area. With our AA+ credit rating, one of the best in the industry, we offer best in class reliability and some of the lowest rates among the top 10 largest U.S. cities. We recognize our role as a community partner and are continuously focused on job creation, economic development and educational investment. Powered by our people, our investment in the community is demonstrated through our employees’ generosity in giving $1.1 million to United Way. We are also committed to investing in clean energy. CPS Energy is number one in Texas for solar generation and among the top wind energy buyers in the nation for municipally owned utilities. For more information, visit newsroomp.cpsenergy.com.