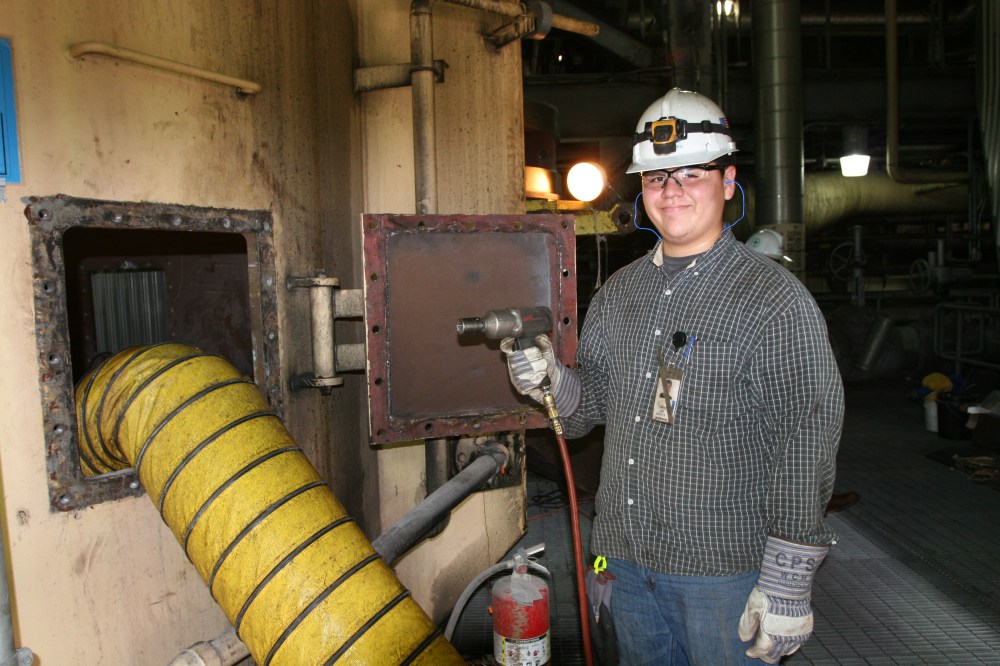 Senior Gabriel Luna and his peers at Sam Houston High School have the skills to turn raw material into a battle-ready robot. Aluminum, wiring, a dash of titanium, and some duct tape are just a few materials Team Aftermath used to build a bot for this year’s Alamo-Region FIRST Robotics Competition. Starting in January, the team had six weeks to build a machine that could maneuver obstacles and scoop up volleyballs to shoot into a basket.

Gabriel spent a lot of time sawing, drilling and wiring the robot. He picked up many of these skills during his summer internship in our SITE program – Students Interested in Technical Education (SITE). Our SITE program is offered in partnership with Alamo Academies, a higher education program that provides technical training to boost the school-to-career pipeline. Gabriel sharpened his machinery skills while working with our Power Generation team at Calaveras Power Station. While the internship helps give him a competitive edge, it’s also helping him prepare for a future career in engineering.

“The internship at CPS Energy helped unlock the machinist within me,” said Luna. “Thanks to the opportunity, I have grown extensively. My mentors taught me how to work hard and put safety first. They taught me tips and tricks with band saws, milling machines and lathes.”

At the FIRST Robotics Competition earlier this month, thousands of students from across the U.S. and other countries, including Turkey and China, filled the stands at the Henry B. Gonzalez Convention Center. One team wore pink hard hats with bunny ears while others dressed in fun attire to represent teams like Greased Lighting, Robowranglers and Bronc Bots. During a break between competitions, team mascots got the crowd involved in some popular dances like the Whip & Nae-Nae.

Meanwhile, the mood at Team Aftermath’s booth was tense. The students worked on a last-minute problem with their robot moments before competition. Fortunately, because of an alliance with a team from Austin, the team was able to troubleshoot the issue successfully.

Diana Godines, an engineering teacher who helps mentor the team, said an important part of the competition is teamwork. Students with different skill sets in robotics, mechanics, electronics and computer programming work together and build alliances with other teams.

“It really helps them build up their social skills,” said Godines. “There is a lot of collaboration with other teams even though we’re in competition. We call it ‘coopertition’. I want students to do their best while competing, but I also want them to learn from each other.”

Teamwork and collaboration with other teams are some of Gabriel’s favorite parts of the competition.

“I enjoy the atmosphere and enthusiasm every team brings to the competition,” said Gabriel. “I also love the idea that every year you can learn so much from other teams and individuals whether it be about a new product, an unknown strategy, or how to overcome certain tasks.”

CPS Energy sponsors FIRST Robotics each year to encourage students to excel in science, technology, engineering and math (STEM). The opportunity allows us to invest in students that we hope will choose to pursue future careers right here in our community.

Gabriel will be sticking close to home at least after graduation. He plans to return for another internship this summer with our Power Generation team. Next fall, he’ll take advanced machinist classes at St. Philip’s College. See you this summer, Gabriel!